On January 15, 2014 three of our employees had a brush with fame, being pictured or quoted in the Vancouver Sun newspaper for their involvement in a large piece of public art fabricated by Brenco. 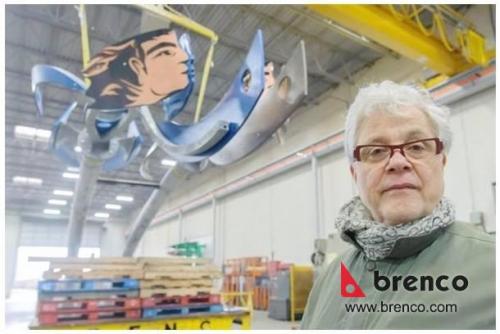 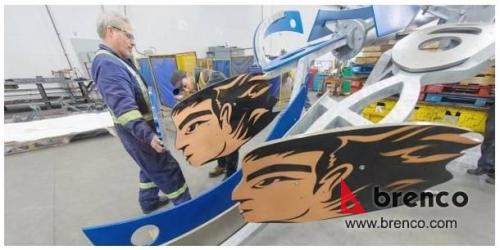 This 10 meter tall steel, aluminum and copper sculpture by Michael Nicoll Yahgulanaas, has been over a year in the making. The piece was commissioned by the City of Kamloops, BC and will be located in Riverside Park where the North and South Thompson rivers meet.

This is the second time Brenco has been chosen by Mr. Yahgulanaas to help turn his design into reality. Abundance Fenced, a 42-metre-long contemporary Haida piece located in Kensington Park, Vancouver was the result of our first partnership and we look forward to working together more in the future.

Rather than stumbling through an explanation, we will let the professionals at the Vancouver Sun tell you about the project while we stick to what we are best at: cutting, forming and fabricating the metal creations our customers require.

A sculpture by artist Michael Nicoll Yahgulanaas that recreates the moment before the North and South Thompson join and become the single Thompson River was put together and raised for the first time Wednesday at a metal fabricating plant in Delta.

Called Rivers, the soaring steel and aluminum sculpture commissioned by the City of Kamloops is more than 10 metres tall. At the top, representing the two arms of the river, are stylized female swimmers in copper leaf.

In front and below, curving metal flows like the water in the rivers. The work’s dominant browns and blues represent the colours of the two rivers before they meet to become one and flow west to eventually join the Fraser River.

Fabricated by Brenco Industries, the sculpture will be erected in Riverside Park at a spot where people can see the confluence of the two rivers. The official opening is planned for February.

“It is a sweet location,” Yahgulanaas said in an interview at Brenco.

“It’s about trying to find that moment just before the two rivers meet — that sense of anticipation.”

He described Riverside Park as one of those special places where people also meet and gather.

“It’s almost like the centre of a compass rose. I spent some time thinking about what is it like to be in a place that feels special. The geography says there is something unique. If we’re observing and watching, what is it that we’re seeing?”

A contemporary artist from Haida Gwaii, Yahgulanaas has created a work that will be situated in a spot that was an historically important meeting point for the Secwepemc First Nations. Kamloops derives its name from the Secwepemic word T’kemlups, which means “where the rivers meet.”

Knowing that he’s creating a work for a site on traditional Secwepemc territory, Yahgulanaas said he’s consciously adapted traditional Haida ovoids and formlines in his sculpture to make them more universal.

Yahgulanaas has created other public art works in Vancouver: Take Off is a metal sculpture made with Volvo car parts at the Thunderbird Winter Sports Centre; Abundance Fenced is a metal fence at Knight and East 33rd in Kensington Park inspired by the record-setting 2010 Fraser River salmon run.

Built at a cost of $130,000, Rivers will be going into the centre of a traffic circle on Lorne Street, which runs parallel to the park. Close by is Interior Savings Centre arena, home of the Kamloops Blazers junior hockey team.

Barbara Berger, recreation, social development and culture manager for Kamloops, said for the first time in the city’s history, Kamloops created a jury of artists and curators to oversee the selection process, which started in December 2012. Yahgulanaas’ concept was the jury’s unanimous choice, she said.

“We’re looking at this as a template for how we do other public art projects,” she said. “We didn’t want it to be something that happens administratively off the corner of my desk. We wanted professional artists who are weighing the proposals and guiding us and helping us select work.”
Part of the process included Yahgulanaas building a maquette to scale. Berger said when she shared it around the office, it helped build support among senior administrative staff for the project.

“It made them excited about the project as well,” she said.

Kamloops puts aside $50,000 a year for public art. Recent installations of other public art works in Kamloops, she said, has “created a positive buzz in the city. People are loving the conversation that it brings about. I can see a lot more public art coming in future.”

Known for fabricating metal for industry, Brenco Industries also has carved out a local reputation for making public art. Recent works include Supernatural Eye by Robert Davidson, which is temporarily installed at the Surrey Arts Centre, and Salmon Spindle Whorl by Jody Broomfield at Park Royal Shopping Centre.

Mike Lanteigne, senior project manager for Brenco, said Yahgulanaas’ sculpture is by far the tallest piece the metal processing and fabricating plant has ever made. It weighs just under 1,360 kgs (3,000 lbs.).

“We do have the best collection of equipment in town. We can do just about anything that an artist can imagine.”

This 10 meter tall steel, aluminum and copper sculpture by Michael Nicoll Yahgulanaas, has been over a year in the making.