THE FABICATOR: From Olympics to museums, metal arts a part of Canadian fabricator

The idea artist Xwalacktun (Rick Harry) had for his first metal arts piece proved too much for the fabricator he approached originally in the mid-2000s. A suggestion given to him? To give another Vancouver area fabricator a call. "They suggested we go see Brenco Industries," he said. 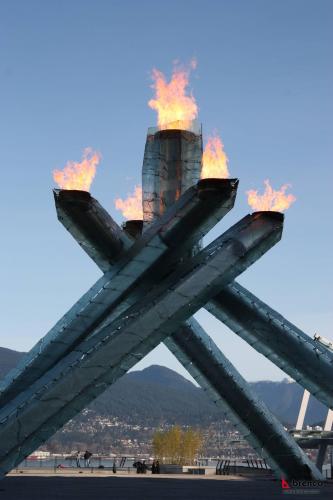 The Delta, British Columbia-based business had a waterjet cutter large enough to help his idea become reality: “Sna7m Smànit” (Spirit of the Mountain), an 8- by 24-ft. sculpture that required 40 hours of continuous cutting.

The piece stands near the entrance of Ambleside Park in West Vancouver, British Columbia, with the
Lions Gate Bridge and English Bay as the backdrop. It evokes the bridge and the nearby twin mountain peaks known as The Lions. Its canoe, paddles, basket, and thunderbird head symbolize the Squamish Nation, unity, community, and peace.

Xwalacktun, a member of the Squamish Nation, later worked with Brenco on “He-yay meymuy” (Big
Flood), a 16-ft. aluminum totem pole installed outside the entrance of the Audain Art Museum in Whistler, British Columbia.

“When I looked at the building, I noticed it was built on stilts ... well, maybe I could share the story of the floodplain,” he said of his inspiration for the totem,
installed in the mid-2010s.

“We ended up doing it in two pieces. Brenco could manage that, roll it, and fabricate it back together in one piece. They did a fabulous job on it because you can’t notice it is two pieces,” he added.

Xwalacktun’s artwork with Brenco are among the several metal arts projects the company has been involved with. For the Canadian fabricator, metal art is an important component alongside their metal cutting, forming, and fabricating services.

“A lot of these artists have portfolios showing that they’ve sculpted their work themselves. But when it comes to metal arts, they don’t have the capabilities to cut or shape something in the way that they want,” he said. “This is where we come in.”

The majority of these pieces are made of stainless steel or aluminum. Laser cutting, plasma tables,
waterjet tables, press brake machinery, plate rolls, shears, drills, a punch press, and a full welding department are at their disposal.

Lanteigne has no estimate as to how many metal arts pieces they’ve been involved in over the years.
More than 100 projects, though, are featured on Brenco’s separate website, brencoart.com.
The company launched the website about three years ago to highlight the artwork they’re involved in
some form or another, he said.

“It was something we wanted to do. It is basically a map of the lower mainland; it’s got the teardrops
showing where all the artworks are. If you just click on a piece, it’ll tell you where it is in that area,” Lanteigne said.

“Under deep secrecy, we were commissioned to cut and form the large stainless steel arms that are
draped in glass panels,” according to the description on brencoart.com.

Their involvement in the Olympics project was a “well-kept secret,” Lanteigne said.

“We did the parts, just like with any other project. But it just turns out it was for the cauldron,” he said.
Brenco Industries is involved with projects as simple as signage or as complex as “Sna7m Smànit” or
“Salish Sea, the Journey Within,” a 26- by 8-ft. structure from artist Susan Point, which greets cruise ship visitors at Canada Place at the Port of Vancouver.

Some artists ultimately become repeat collaborators with Brenco, like Xwalacktun. He is currently
working on another project with the fabricator that he hopes to finish later this year.

“I’ve worked quite a few projects with them. They’re very friendly and trustworthy,” he said.